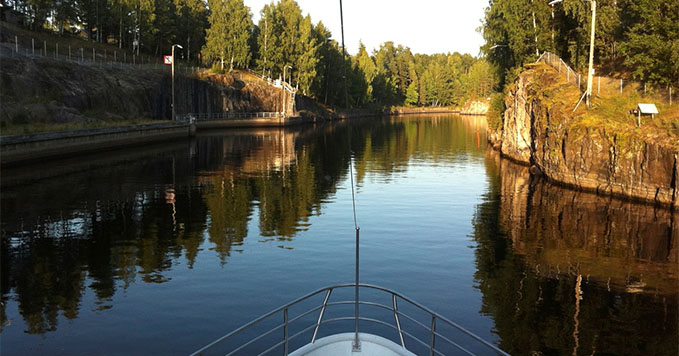 HISTORY OF THE SAIMAA CANAL

A waterway connection from the Lake Saimaa to the Gulf of Finland and further to Europe can be considered as an ancient idea. The first attempts to build the Saimaa Canal were made in the 1500s and early 1600s. The first Saimaa Canal, with 28 lock chambers, was completed in 1856.

The Saimaa Canal was rebuilt in the 1920s, as the canal was proving to be too small. From this so-called. second construction of the canal, 40% was completed before the Second World War.

After the war, about half of the canal remained in Soviet territory and the waterway from Saimaa to the sea was cut off for more than 20 years. In 1963, construction of the present canal began, made possible by an agreement between Finland and the Soviet Union, whereby the Soviet Union leased the Soviet side of the Saimaa Canal to Finland for 50 years. Construction of the new canal, which has eight locks, was completed in 1968.

The Saimaa Canal is open for boating throughout the boating season, 24 hours a day. The channel is a whole, with all eight locks having the same dimensions and technology. The maximum ship size is 82 x 12.2 x 4.35 meters and the underpass height is 24.5 meters.

Locks of the Saimaa Canal

The Brusnichnoye lock is the lowest lock coming from the sea. It has a waterfall height of 10.0 meters.

2. ISKROVKA lock
The fall height of the Iskrovka lock is 11.4 meters.

3. TSVETOCHNOYE lock
The height of the Tsvetochnoye lock is 5.5 meters.

4. ILISTOE lock
The fall height of the Ilistoe lock is 10.2 meters.

5b. THE FLAP BRIDGE AT KANSOLA

6. SOSKUA LOCK
The fall height of the Soskua lock is 8.3 meters.

7. MUSTOLA LOCK
The height of the Mustola lock is 7.3 meters.

8. MALKIÄ LOCK
The lock of Mälkiä absorbs the fluctuations in the water level of Lake Saimaa and has a fall height of about 13 meters. Attractions: on the east side of the lock, the old Mälkiä lock group from 1856 and the canal museum.

The next Saimaa lock cruises:

The next lock cruises:

This website uses cookies to improve your experience while you navigate through the website. Out of these, the cookies that are categorized as necessary are stored on your browser as they are essential for the working of basic functionalities of the website. We also use third-party cookies that help us analyze and understand how you use this website. These cookies will be stored in your browser only with your consent. You also have the option to opt-out of these cookies. But opting out of some of these cookies may affect your browsing experience.
SAVE & ACCEPT